“For a guy that ain’t straight at all, he’s pretty goddamn straight. He’s one of the few honest people I’ve ever met, for good or ill.”

Ah yes, Mr. Ginsberg was an important member of The Gonzo Tribe for many reasons, not least for the help he gave Hunter when he was writing Hells Angels. I received an email during the week from Noel Dávila about an exhibition that he recently attended which I am sure you will all find interesting –  Beat Memories: The Photographs of Allen Ginsberg. The exhibition is taking place at National Gallery of Art, May 2–September 19, 2010. Here is a brief excerpt from the official website about the exhibition:

In the first scholarly exhibition of American poet Allen Ginsberg’s photographs, all facets of his work in photography will be explored. Some 79 works on display will range from the 1950s “drugstore” prints to his now celebrated portraits of Jack Kerouac and William S. Burroughs, snapshots of Ginsberg himself taken just before he achieved literary fame, and his later portraits of the Beats and other friends made in the 1980s and 1990s. Ginsberg (1926–1997) started taking photographs in 1953 when he purchased a small, secondhand Kodak camera. For the next decade he captured numerous intimate shots of himself as well as his friends and lovers. He abandoned photography in 1963 but returned to it in the early 1980s. Encouraged by photographers Berenice Abbott and Robert Frank, he reprinted much of his early work and began making new portraits, adding sometimes extensive inscriptions. Although Ginsberg’s photographs form a compelling portrait of the Beat and counterculture generation from the 1950s to the 1990s, his pictures are far more than mere historical documents. The same ideas that inform his poetry—an intense observation of the world, a deep appreciation of the beauty of the vernacular, a celebration of the sacredness of the present, and a faith in intuitive expression—also permeate his photography.

Here is a photo of Noel at the exhibit. 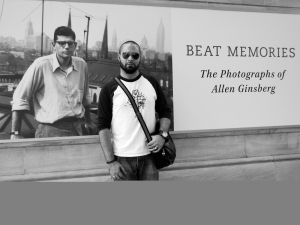 Noel is singer/songwriter, blogger, music journalist, poet…and as you can tell from the photo, a Gonzo junkie like myself. Hunter once described a person into Gonzo as being like an egg-sucking dog – there is no known cure. Noel knows this well, as I am sure you all do. Make sure you drop by Noel’s site  www.noeldavila.net and check out his work. He is a talented bloke and is a contributor to the HST for Beginners series.  (note to self – submit something before Marty lynches me)

Ok for now and thanks to Noel for the heads up!

At Caffè Greco, the oldest cafe in Rome. Frequented by Keats and Byron in their day. Thanks for the tip @croninjohnny
Warren Zevon should have been in the Rock 'N Roll Hall of Fame YEARS AGO....time to make things right.
We've lost a guitar legend, the mighty @jeffbeckofficial - do yourself a favour and listen to Blow by Blow in its entirety. Sublime.
Ah Pushkin, that mouse was so close...
A great year but missing my friend Pushkin that went missing one Wednesday and never returned. Hope you are out there somewhere having fun!
Happy New Year