A while back I blogged about this upcoming release and I was wondering how the project was coming along, so I decided to contact Paris Records to find out. Good news – they have just recorded the music tracks for the album in NYC.

Bill Frisell assembled a group of top New York session musicians to record his original compositions for the Paris Records project. Producers Hal Willner and Michael Minzer were very pleased indeed with the results– Minzer described the music as ” a picnic at Cape Fear. ” There’s some eerie tunes comin down……

Also I am delighted that Michael Minzer has decided to kindly share with us some photos from the recording session. 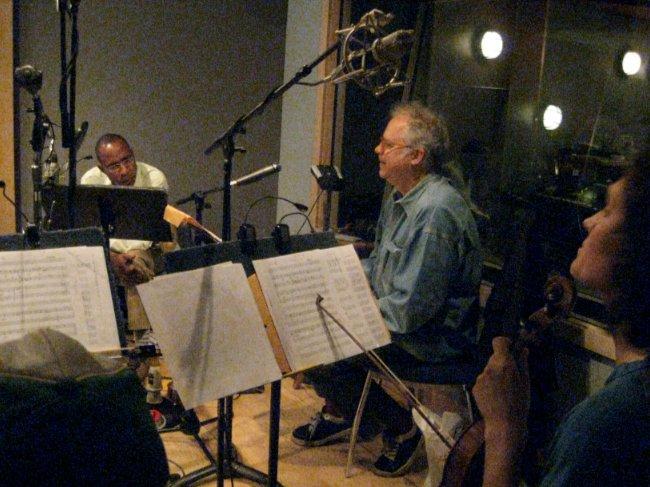 I have to say that this project is shaping up to be something really special and as soon as there is a release date I will be sure to let you all know. Hopefully “soon” is the word!

UPDATE: Anna Minzer has blogged about her father’s project and has revealed a tentative release date of Fall 2010. To read the article and see more pictures of the recording session click here.

UPDATE 2: Ralph Steadman has the entire Kentucky Derby article including original artwork over at his site.

One thought on “Paris Records – The Kentucky Derby is Decadent and Depraved!”

I'm not one for commenting on public executions but it is hard not to notice this particular one over the past while. What to say...I keep coming back to a comment that Hunter made about Fred Exley's 1968 novel, A Fan's Notes. In a letter to Selma Shapiro of Random House, Hunter wrote - "There is something very good and right about it, hard to define...Very weird. I suppose it's the truth-level, a demented kind of honesty."
Ok so, time to address this one. Have been getting lots of enquiries as to what I am doing - is my book on Hunter getting published, am I still working in academia, will I sell my site, page, collection etc.
Latest addition to the collection. Any ideas as to the book and where it came from?
50 years - Part 2
50 years today #fearandloathinginlasvegas #HunterSThompson #RalphSteadman #Gonzojournalism #gonzo #RaoulDuke #DrGonzo #OscarZetaAcosta #Art #Journalism #Literature #AmericanWriters #AmericanDream #batcountry #Counterculture #LasVegas #bookstagram
Really enjoyed this bio-comic of underground press legend John Wilson, the man behind the international counterculture newspaper Other Scenes, for which Hunter contributed "The Ultimate Freelancer" on the life of Lionel Olay and later "How The Freaks Almost Took The Town" a nearly 4,000 word article on the 1969 Aspen, CO mayoral election which is not reprinted anywhere else.